An enthusiastic group of Greater Glider supporters surveyed the gullies and ridges of Baranduda last week with Parklands rangers.

Wielding binoculars, they scrambled through some rugged country searching for habitat trees and signs of gliders in residence. Having clambered up one steep gully, they found that the large hollow bearing trees they were seeking were actually more frequent on the ridges and back down closer to the houses.

The group were very pleased to note good habitat so close to urban development, and did indeed find scratchings on the trees – evidence of gliders. However, this close proximity raises concerns about the threat to the Greater Glider population by domestic cats. 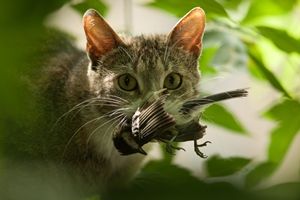 Being nocturnal, and having no natural defences against predators, gliders are at particular risk from cats that are allowed out and about at night.

The message is, please, make sure your cat is not at large in the bush, especially at night.