Users of the tracks in the Gateway Island bushlands may have noticed areas of heavily slashed or sprayed grass in past weeks.

This has been in preparation for mass plantings of native grasses, which began today.

To outcompete weeds, swathes along the track have been sprayed or slashed, and covered with special matting. Native species like Poa, Kangaroo (Themeda), Wallaby (Danthonia) and Weeping (Microleana) grasses have been planted in premade slots in the matting.

The aim of these plantings is to improve the amenity of the park and showcase native grasses, which have their own delicate beauty at different stages of their annual cycle.

In addition, these grasses grow less vigorously than the weedy grasses that have taken over much of the bushland in this area. Grasses like Phalaris, which was originally introduced from Europe as pasture for sheep and cattle, form a vigorous monoculture once grazing stops. This is evident in many areas of Wodonga that used to be farmland.

Aside from forming rambling impenetrable thickets unsuited to pedestrian areas, they do not support native wildlife and dry off early in summer, creating high fire risk. In order to mitigate the fire risk, these grasses require constant slashing in spring and summer.

Contrast this with native grasses, which are more sparse, clumping by nature and grow with bare spaces between plants. The native grasses on Gateway Island will only need one mow during the growing season and will remain green in summer, substantially reducing fire risk. They will also be providing habitat for native wildlife.

Planting continues on the Gateway Island sites, with our aim this year to double the area planted to date. 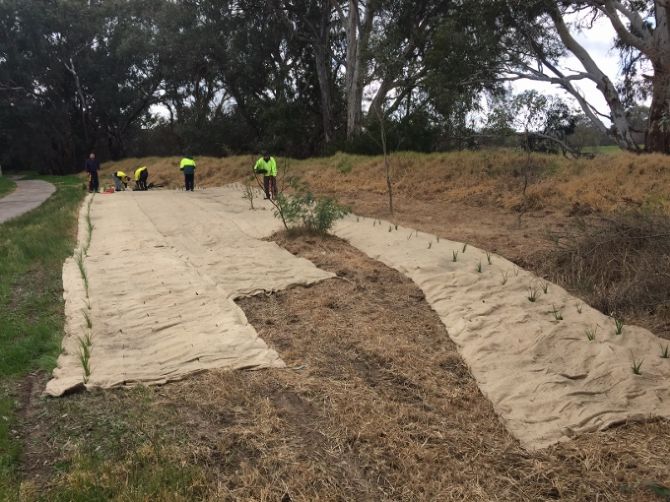 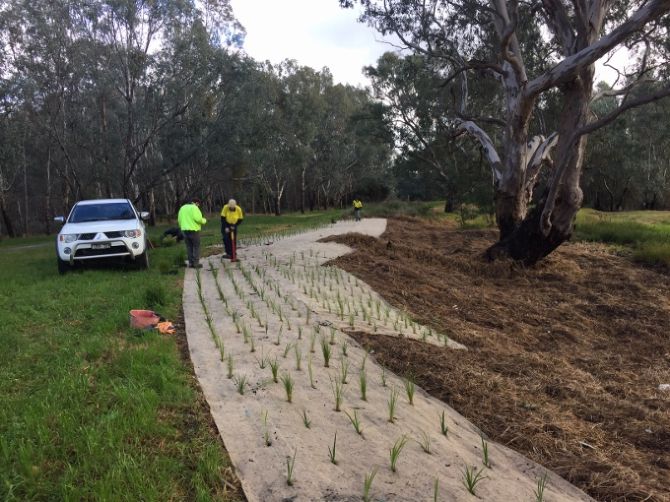