In the Presence of a Pardalote

In the Presence of a Pardalote

Look who dropped in to Parklands last week!

This tiny bird is a Spotted Pardalote – a female – who dropped down to perch for a while on our plant sorting bench. Plant sorting was of course thoroughly interrupted by such an unexpected guest, who seemed quite happy to stay for a few photos. She even perched on the finger of Ranger Dan Jones before flying back up to the trees.

Spotted Pardalotes are one of our smallest birds; rarely seen, but more often heard. They forage high in the crowns of eucalypt trees, where they pluck invertebrates, especially psillids, from the leaves. They are important to the health of the trees, cleaning up insect pests.

Pardalotes only descend to earth when nesting, or for an occasional drink. They build their nest in a long horizontal tunnel dug into the soil of creek banks or man-made embankments. Sometimes they even excavate tunnels in rabbit burrows, or potted plants in gardens.

Pairs make soft, whistling wheet-wheet calls to one another throughout the day, which carry for quite a distance. One of the difficulties in locating a pardalote is that the contact call is in fact two calls: an initial call and an almost instant response, and thus can come from two different directions. 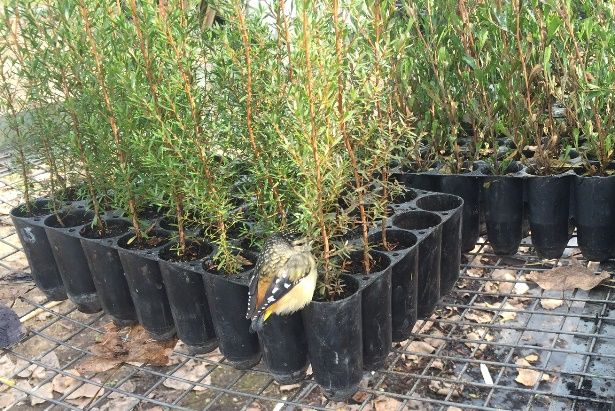