It was cold. It was dark. But it was exciting!

Parklands hosted two night walks during the school holidays, with Ranger Dan’s spotting skills rewarding those attending with a variety of nocturnal animals, including brushtail possums, ringtail possums and even a glider.

The walks were held along Felltimber Creek in West Wodonga and in the Waterworks Regional Park near East Albury.

It was terrific to see families, friends and individuals join in. Ranger Dan explained he would seek out the eyeshine using a white torch then switch to a light with red filter, which is less disturbing for the animals. Dan has a keen eye and shared his tips for recognising some of the different species we might expect to see.

For the walk at Waterworks, Ranger Dan was joined by naturalist Karen Retra, who also demonstrated how platforms like iNaturalist, FrogID and NatureMapr can be used to record and share nature observations.

Karen noted the existing records within 1km of the site. Most of these are birds – a testament to the number of people who love to spot birds and to share their observations. Karen narrowed down the list to just the area of the walk, and noted that although gliders have been recorded nearby, there weren’t any records for this particular spot.

The challenge was set – next we headed off into the dark to see if what we could find.

Brushtail possums were the most conspicuous of the finds – and their habit of staying put in the torchlight gave everyone a good chance to look. Then there was a sudden exclamation from Dan as he spotted a glider. We had a good look and took some photos so we could log the sighting – a first record of gliders in this spot!

We were surprised that we didn’t hear any frogs calling during our visit, although maybe we were a bit noisy for their liking. And although we didn’t hear or see owls during this walk, the following night a barking owl was calling in this spot for most of an hour. A recording of its call has been added via iNaturalist, another first record for this park.

You might like to take a night walk of your own to explore the sights and sounds of our nocturnal wildlife firsthand.

If you’d like to come along to a night spotlighting event, be sure to keep an eye on the Parklands events page, social media posts or subscribe to The Understorey newsletter.

A big thanks to everyone who joined in. Terrific spotting and spotlighting by Ranger Dan, report and photos by Karen Retra and funding support from the Victorian Government. 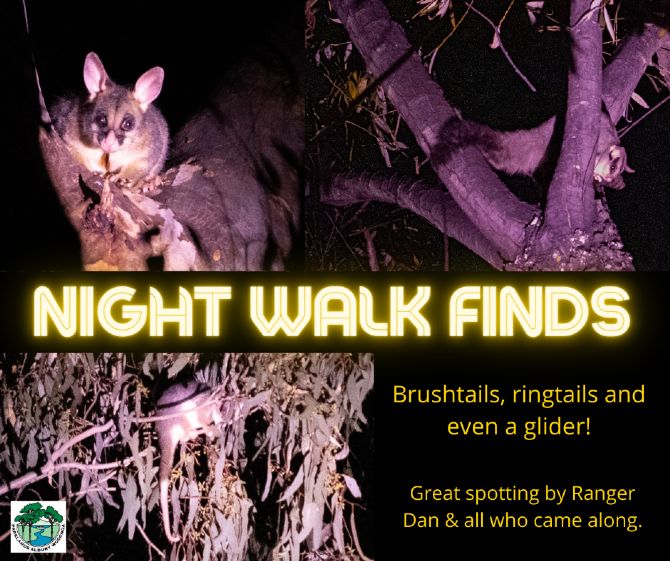